Abstract.— Conostigmus albovarius Dodd, 1915 (Hymenoptera: Megaspilidae) is a species previously known by a single female holotype. Here, we provide a redescription of this peculiar ceraphronoid based on several female specimens and describe the male of the species for the first time. Intraspecifically-variable morphological traits such as female antenna color pattern are documented and discussed. A phenotype bank of morphological characters is provided for use in future megaspilid taxonomic treatments. We also provide phenotypic data in a semantic form to allow for ease of data integration and accessibility, making taxonomic data more accessible to future systematic efforts.

I gotta say that I am really proud of the talks my lab gave at this year’s Entomological Collections Network and Entomological Society of America meetings. You can find the slides below:

I also gave my own talk, in which I summarized our experiences with a recent morphology course we offered: Know your insect (ENT 530):

It could’ve (should’ve?) been one of the worst talk experiences I have ever had—crackly voice, blistering headache, sore throat, cough of death—except that I was overwhelmed by the massive interest people seemed to have in the topic. The room was completely filled, with every square centimeter of floor space covered by entomologists and a huge overflow out into the hallway. I couldn’t believe it! And, to top it off, there was a massive line afterwards to talk to me about morphology course ideas.

Based on these interactions, as well as some incredible talks by my colleagues (I’m looking at you, Brian Wiegmann), I’m now more motivated than ever to pursue some of the ideas we have for training the next generation of entomologists in core entomological knowledge. Watch this space for a deeper explanation, updates about collaboratively-developed educational materials, and news of an upcoming morphology workshop for graduate students.

Thank you all for making ECN and ESA such vibrant, accepting, and exciting communities! 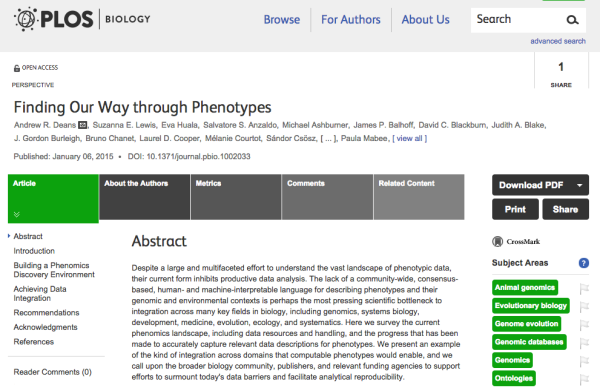 Abstract.—Despite a large and multifaceted effort to understand the vast landscape of phenotypic data, their current form inhibits productive data analysis. The lack of a community-wide, consensus-based, human- and machine-interpretable language for describing phenotypes and their genomic and environmental contexts is perhaps the most pressing scientific bottleneck to integration across many key fields in biology, including genomics, systems biology, development, medicine, evolution, ecology, and systematics. Here we survey the current phenomics landscape, including data resources and handling, and the progress that has been made to accurately capture relevant data descriptions for phenotypes. We present an example of the kind of integration across domains that computable phenotypes would enable, and we call upon the broader biology community, publishers, and relevant funding agencies to support efforts to surmount today’s data barriers and facilitate analytical reproducibility. 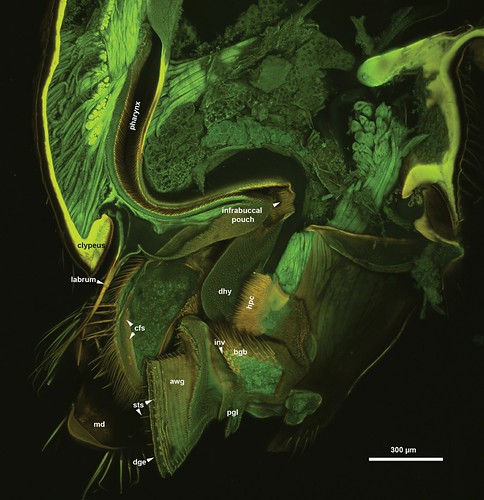 Our latest morphological analysis is out! Check it out at the Journal of Hymenoptera Research:

A quick follow-up to last night’s post. Here is the plate from Illiger’s original description of Tettigonia speciosa (now Tacua speciosa). The plate can be viewed in Wiedemann’s Archiv für die Zoologie, available through the Internet Archive. When you’re done with that surf the Biodiversity Heritage Library’s plates at flickr. That’s enough procrastination material for about a million years …

I saw an opportunity to test the power of the Web today, when a video snippet from the The Daily Show came into my Twitter feed. At 2:00 Jon Stewart references an entomological factoid/stereotype in a joke about the state of gun control in the U.S. I’m a sucker for entomological references outside the world of science, especially ones that are wrong. So how did this one score?

First, the context: The U.S. Bureau of Alcohol, Tobacco, Firearms, and Explosives (ATF) is apparently prohibited from investigating gun dealers for inventory discrepancies more than once a year, and the reality is that they only investigate dealers every 17 years. Jon Stewart then joked that he assumed this situation was the result of the ATF not having enough agents/inspectors rather than their agents being cicadas. As Jon Stewart said next: “let that insect joke just wash over you…” 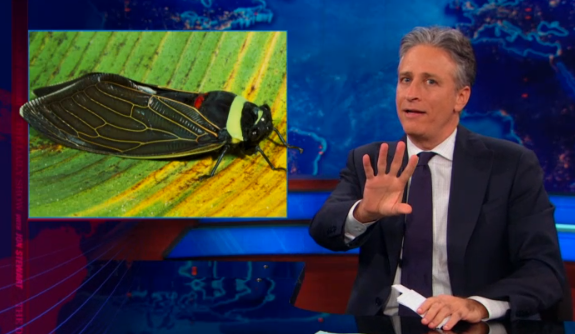 Of course some periodical cicada species are famous for their synchronized 17-year life cycle—Magicicada septendecim (Linnaeus, 1758), M. septencassini (Fisher, 1851), and M. septendecula (Alexander & Moore, 1962)—but there are about 2,500 species of Cicadidae. A small minority of species take 17 years to develop. What about the species represented in the accompanying image? Doesn’t look like Magicicada to me, not that I’m an Auchenorrhyncha specialist, but at least it’s really a cicada!

Next steps: identify that species and find the science needed to bust this joke apart. It took me about 7 minutes to determine the species, and I literally know next to nothing about cicada taxonomy. A cropped screenshot, run through Google’s image  search came up empty, even after I supplemented the image file with key words, like ‘cicada’ and ‘cicada tropical red yellow’. I thought for sure they must’ve grabbed that image from Wikipedia and therefore would have some useful figure legend. Nope. My quick browse revealed nothing. What about flickr? Surely a lazy image search (or less lazy CC BY 3.0 search) would reveal the image and its associated data … nope. Ok, what about just regular Google searches for ‘cicada black yellow tropical’ etc. This must be a common cicada species if people at the Daily Show found an image! No luck. Back to Wikipedia to browse up and down the classification. (several pages’ worth of browsing) Hmm … Tosena looks close. Search flickr for Tosena and find this image. Not quite there but it seems like right ball park. The image caption mentions Borneo. Back to Google image search: ‘cicada malaysia‘. Ah ha! This cicada looks right:

Tacua speciosa (Illiger 1800). Does it have a 17-year life cycle? Wikipedia doesn’t help. Google Scholar? Seems like almost nothing is known of this species, or at least very little has been published. The Encyclopedia of Life’s Tacua speciosa page doesn’t offer too much information either. This was perhaps the most useful page I could find about the species—http://www.cicadamania.com/cicadas/tacua-speciosa/—which still leaves me hanging with respect to understanding this species’ natural history.

In summary, this exercise drove home two important points: 1) the Web is an increasingly useful tool. I was shocked at how little time it took me to determine this species (not sure I’m right, though!) and how many resources, both amateur and professional, I had at my disposal to get the answer. Again, I literally know next to nothing about cicada taxonomy. So, who needs keys?! (note to self: turn off comments for this post). 2) We know so little about the life histories of even the most conspicuous insects. This species is HUGE, colorful, charismatic, and frequently photographed (but not collected? Only 4 specimens listed in the Cicada Database) , yet we apparently know very little about its biology.

Not sure the Daily Show picked the best image to accompany their joke, but it’s certainly a beautiful insect (and it’s a cicada, so no taxonomic #fail). In the meantime let these beautiful images of Tacua speciosa wash over you.

Stunning Evaniscus rufithorax specimen – one of the reasons I am enamored of these wasps.

Our lab group has published a small flurry of papers in the last two years, through which we highlight problems in the way that phenotype data are represented (visually and textually) in descriptive taxonomy and comparative morphology. I should probably make time to write these ideas up as blog posts, as I feel pretty strongly that the issues – if not our lab’s solutions – warrant deeper discussion. The two most recent and maybe most approachable syntheses are:

The latest installation, which yields real world examples of semantic phenotype annotations, in the context of descriptive taxonomy (see our TREE opinion) came out today in ZooKeys:

One thing we attempted to do in this paper is layer semantic phenotype annotations (composed in OWL, linked to relevant phenotype ontologies; see Deans et al. 2012) on top of our natural language character descriptions. The end result should be a more explicit textual representation of the phenotype represented in the character. For example, taxonomists, including us, are obsessed with measuring body parts. In this paper we measured the diameter of the lateral ocellus (LOD, for short) and compared it to the shortest distance between the lateral ocellus and the compound eye (OOL, for short):

The ocelli are the somewhat circular light-detecting structures on top of the wasp’s head. This individual has three of them – two lateral ocelli and one median ocellus. I annotated one lateral ocellus to (poorly) illustrate the measurements we made.

The ratio of these measurements in Evaniscus wasps is diagnostic at the species level. But how do we represent these data in a species description? Maybe something like “ocellar ocular line length as long or longer than lateral ocellus diameter” or maybe “OOL ≥ LOD” or maybe even as a character and its state “ocellar ocular line length vs. lateral ocellus diameter: as long or longer”. Or someone could be even more verbose and describe the character as “the shortest distance between the lateral ocellus and the margin of the compound eye equal to or perhaps shorter than the diameter of said ocellus”.

You see where I’m going. There are many different ways to represent this phenotype using prosaic natural language. Human readers probably would interpret most of these variations correctly and understand the character. But what happens when we pool all species descriptions for Hymenoptera (>145,000 described species) or, even better, for Insecta (>1,000,000 described species). Can humans read all these descriptions—composed by thousands of taxonomists with different backgrounds, preferences, eccentricities, or even different languages—and interpret the characters correctly? Almost definitely not. Yet data about ocellus size are potentially relevant to many scientific endeavors. Maybe I found an ocellus mutation in Drosophila melanogaster and want to know how common the phenotype is in nature. Or maybe I have a hypothesis about ocellus size (these structures are relatively larger in temperate insects, where light patterns vary greatly, according to season) that requires massive amounts of standardized phenotype annotations (connected to distribution data) for a proper test.

So, can we represent complex phenotypes using rigorous concepts and a standard syntax, like we do with DNA (i.e., IUPAC nucleotide symbols)? Our working—let’s call it draft—solution is to represent the phenotype in OWL, using multiple phenotype-relevant ontologies. The ocellus character state mentioned above looks like this and is applied to the specimen examined:

Looks weird perhaps, but the goal is to write these annotations in a way that makes them understandable/retrievable by computers. These annotations would appear in addition to natural language prose in our new model for descriptive taxonomy. I’ll write a bit more about the approach after our next paper is finished, as we have a fair bit of discussion about advantages, limitations, and real utility (e.g., we do some basic queries across a larger species description data set).